We decided to hike the Cap Ridge Trail up from Jefferson Notch Road for the 5 mile round trip hike. The weather couldn't have been more perfect. There wasn't a cloud in the sky. When we arrived at the lot around 11:30 we didn't even make it in. There were that many people hiking. We parked on the road and made our way to the trailhead. The lower portion of the hike was fairly easy. We made it to the "potholed" rocks and took a break to enjoy the views and a snack. Some gray jays were scoping out our food too! 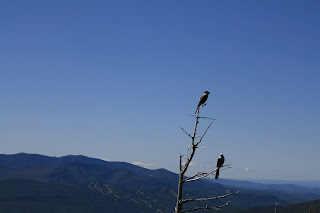 We pushed on to reach the caps. Each cap gave us a terrific view of the surrounding mountains. The trail was tough from this point on. Lots of rocks to navigate on and around. I'm very glad that there was little water on the trail so the rocks were dry. The heat would have been tough but we had a wonderful breeze. At the second trail junction we stopped for some lunch before the .4 mile push to the top. We thought we could see the summit from here but in truth we couldn't. We would think this several times! 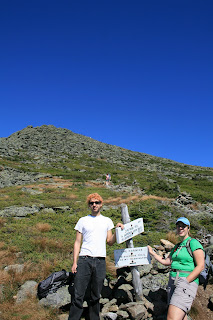 We reached the summit about 3 PM. There were tons of people up there. Some had done loops up and around the other Presidentials and others were just up and back like us. We chatted with some of them and rested admiring the views. Jefferson is the 3rd highest on the list of 4000-footers and we could see many of the mountains we had already conquered. 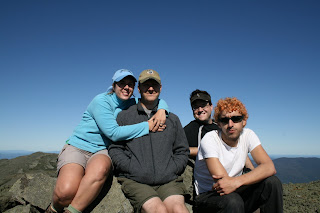 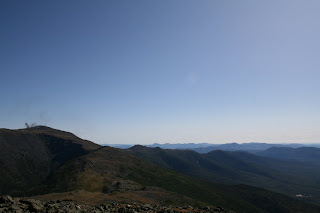 Below the summit was a cairn that was taller than our tallest hiker. I went down to the trail junction and took a picture of it. Being at the top of a mountain like this made me strongly desire that we could go on and tackle Mount Clay and head up to Washington! But fortunately, I have some friends that remind me that even when you reach the top you have to hike back down to the car and civilization. 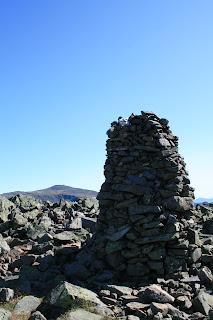 The hike down was treacherous at some points. Dan hiked backwards which he stated saves his knees. It caused quite a stir with some of the other hikers. We made our way down and chatted with several other groups. During this point, Ben slowed quite a bit. His head cold was getting the best of him it seemed. We quickly made it below the Alpine Zone and then back into the forests. 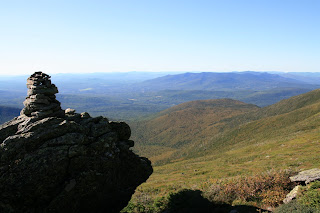 The group arrived back at the car around 5 PM. We definitely did not make "book" time. However, I definitely feel that this was one of my favorite hikes. There were people of all abilities on the mountain. Some stopped at the potholes and others trekked their way to the top. The views were outstanding and the challenge was just enough. So here's the only 4k that I'll get to do this year. I hope to get a few more hikes in before winter decides to show up but I doubt I'll be able to head back up to the White Mountains again for a hike like this.
Posted by Unknown at 6:22 PM No comments: