Last weekend we went on our first camping trip with Little Dude.  We stayed at Burlingame State Park in Charlestown, RI.  It's the largest campground in New England with over 700 campsites.  We booked our site and let a few friends know what we were up to so that they could come along if they wanted.  We went down on Friday afternoon and Little Dude almost made it through the car ride down but about a half hour from the campground he woke up and was very unhappy to be in the car.  So of course we solved his troubles and then moved on.


First thing we did was hook Ansel up to a lead on a tree, which he immediately escaped from.  Big Dude (Ben) set off to capture our dog and I set up our screen house so Little Dude wouldn't be eaten alive by the bugs and there were plenty of them!  Ben returned with Ansel and I went off to see if our friends had arrived.  They had booked a campsite just around the corner from us (far enough so they couldn't hear the baby).  As the skies started to get grey, I went back with the baby to help Ben.  We set up our giant tent that we had inherited from my brother in law when he moved to Michigan with it's duct tape patches and repaired zipper.  I was a bit concerned that it might leak as we could see the sky through the rain fly and there were storms predicted.  The rain held off until late at night and I never even heard the storms. 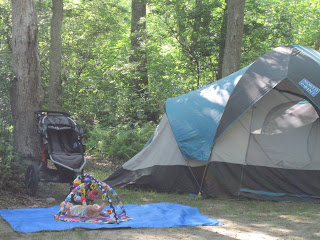 Little Dude was a bit confused by all of this newness.  He stared around the tent and was taking it all in.  He wasn't very excited by his Peapod Tent Thing and I wished I had taken my friend's advice and practiced a few naps in there while we were home.  He fussed quite a bit that evening but once he fell asleep he was out for the night.  We had place his mini tent in our tent.  It proved to be a great shelter from the dog and from the bugs and sun. 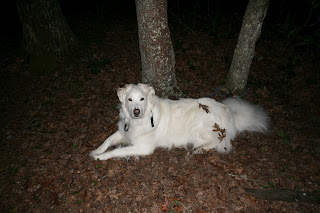 We had a campfire with our friends and shared food and conversation.  When it was the adults' bedtime there was more troubles.  Ansel was out of sorts.  He could hear the people and their dogs at a campsite nearby.  They were up until 3AM and so was he.  He would check on the baby, then me, then Ben, the door, and start all over again.  It took him a looong time to settle down.  So night one: Little Dude slept well, Ansel and the adults not so much.

Saturday was another warm day.  Fortunately not as hot as the day before.  Little Dude went for a walk in his stroller around the campground.  It was not the most impressive campground in amenities but definitely was large.  After lunch, we decided to head to Westerly for a microbrewery that the boys wanted to check out.  Grey Sail Brewing Company was in a small brick building right on the border of CT.  The boys had sample of beer and a "tour" of the brewery.  We drove through town and near the ocean.  There was plenty to do and check out but we didn't feel very motivated to explore.  We returned to the campsite and started a campfire for dinner. 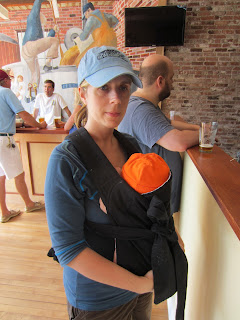 Little Dude had a good day playing and checking things out.  That evening he did NOT want to go to sleep and had since decided that he likes to play in the Peapod.  It definitely was very light out and we worked hard to convince him it was bedtime.  Eventually he did fall asleep.  He really enjoys playing with his fingers now.  Waving them and grabbing at things.  It's awfully fun to watch. 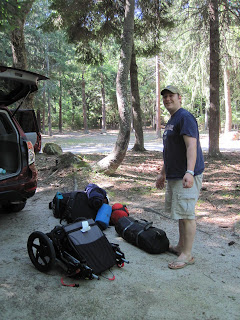 On Sunday, we ate breakfast and started to pack up.  Little Dude played in his Peapod and on the activity mat we brought.  He dozed off and I carried him as we finished packing up the car.  With a baby and a dog we needed to get a roof carrier for our gear.  His stroller does take up quite a bit of room so the carrier definitely helps out. There was much more elbow room in the back.

We made it home in one piece that afternoon.  We had time to unpack and get cleaned up.  Little Dude managed to get a few bug bites which have now disappeared.  He had a fun time in the bath getting cleaned up from his camping adventure Sunday night.  He will definitely be exposed to camping more as he grows.  In fact, we're hoping for another trip this summer.
Posted by Unknown at 10:17 PM 3 comments:

One bright Saturday morning we went over to the local AAA office to talk insurance.  We had some time to kill before we went off to a barbecue so we decided to stroll the banks of the Merrimack River along Pawtucket Boulevard in Lowell.  We parked down by the UMASS Lowell boathouse.  There you can rent kayaks for an hour or for a day to go for a paddle.  Then we strolled with the Little Dude down towards the swimming beach. 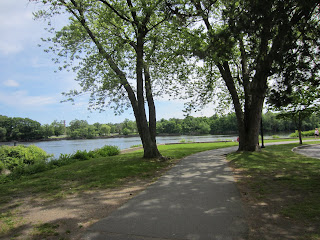 For a sunny, summer-like day the paths were not too crowded.  There were plenty of walkers with dogs and babies. 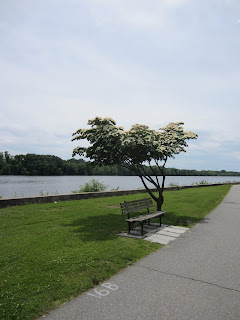 The Little Dude got hungry.  So I settled on a park bench and sent the Big Dude off to get me a snack at the Dunkin' Donuts across the way.  We had an impromptu picnic watching the people biking, walking, and roller blading.  There were some people out on the water as well.  During the school year, there are crew races held out of the boat house.  Those days the park is packed with college students. 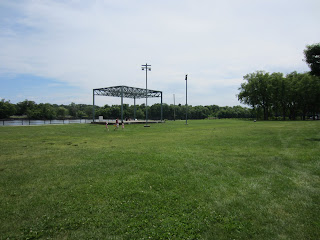 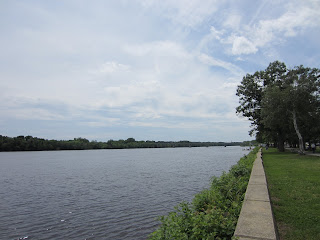 Sampas Pavilion is the site of many events including concerts and classic car shows. In August you'll find the river here being used for the Southeast Asian Water Festival.  That day there were several children playing and running around.  Across the street from the pavilion is Heritage Ice Cream.  Big Dude was disappointed that we didn't swing on over but lots of food was in our future.  Heritage is hosting a free concert series every Monday night this summer.

Across the river you can see part of the canal system.  Tours are lead by the National Park Service.  There is also the Riverwalk, another walking path through Lowell.


The Vandenberg Esplanade is actually only a mile long and is probably the most frequently used path in Lowell.  Along with the sights in these photos you can find a swimming beach which is generally packed in the hot weather.


This is a nice little urban park to take a stroll.  More information and directions can be found at the Lowell Heritage State Park website.

Posted by Unknown at 8:31 PM No comments: