Midstate Trail- End of the trail or is it the beginning?

On Saturday, we set off on the final segment of the Midstate Trail.  Three off us planned to hike the final 7.72 miles to the northern terminus.  We met up at the Mount Watatic parking lot and left one car and drove down to Rt. 12.  Ben checked to see if his snake friend from the week before was there but the snake had moved on.  We set off down the road a piece until we noticed that they yellow triangles disappeared.  Fortunately, we hadn't gone too far as we found this sign tucked back in the woods next to a yard and pointing us towards the trail. 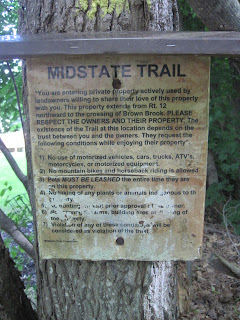 I must say it is super generous of the private land owners to allow hikers to hike on their property.  I don't think I saw once instance of a hiker abusing the trail on private property (on public trails that's a different story).  I hope that these properties continue to be owned by people who enjoy nature and spending time in the woods. 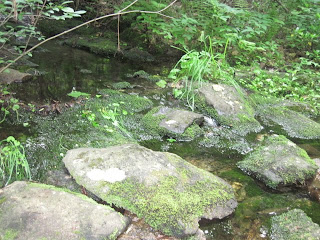 We spent some time in this path, mainly because there was quite a bit of water running through it.  Some of the step stones were covered and we had to work our way gingerly through the streams. 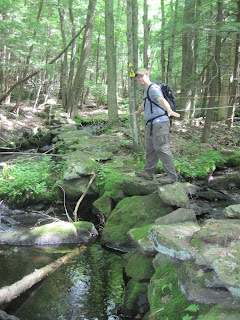 We crossed Russell Hill Road and started the climb up to Mount Hunger.  It was steep but had "flat" portions in between each ascent.  We gained about 350 feet of elevation in a little over a mile. 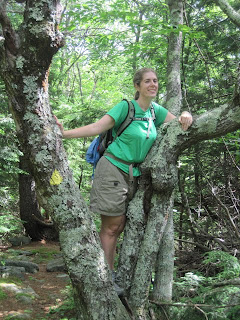 We stopped for a snack on Mount Hunger because it seemed the thing to do.  There was a lovely vista north.  We could see our destination just beyond Stodge Meadow Pond.  Eventually we would climb down from our view point and walk along the shores of Winnekeag Lake (not shown). 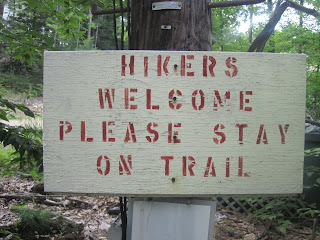 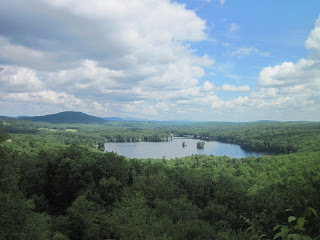 When we did reach Winnekeag Lake, we were feeling pretty warm and were tempted to jump in.  We followed the road Camp Winnekeag parking lot and started our hike through the camp.  On the way we saw this shelter. 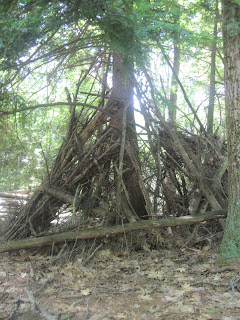 A little further down was a fire circle with an amphitheater.  It looked like a fun place to be!  I have to admit, I miss camp during the summer. 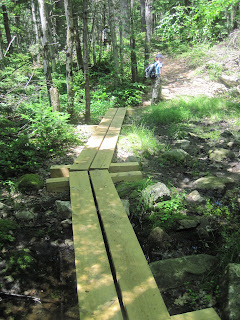 The trails were hot and sticky.  At times the overgrowth was covering the trail.  I, unfortunately, wore shorts that day and managed to cut my legs on several raspberry bushes and pick up a few of my enemies, ticks.  We emerged from the brush and walked through a forest filled with ferns.  This of course led to comments about bears and velociraptors hiding in the woods, waiting to pounce. 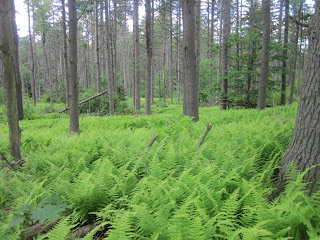 We saw neither bear or velociraptor but we did find Pierce Road and an older couple that let their GPS get them lost.  We tried to help them but the road they were looking for wasn't on my map.  They ended up turning around and heading back to Rt. 119.  We crossed 119 cautiously as the traffic was flying by and entered the Watatic Parking area.  We started up the trail and saw lots of families coming down.  We were told there were lots of blueberries up top.  Of course, many of these hikers thought we were just starting out, even though we had already hiked about 6 miles or so. 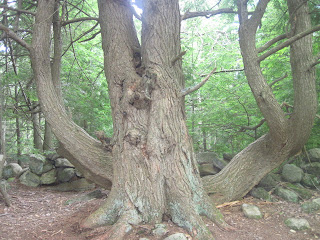 The hike up wasn't too bad.  We did stop a few times to catch our breath but I just wanted to push on as I knew we were close to our goal.  I took a quick self portrait while waiting for my hiking buddies to catch up just before reaching the summit.  And I found this sign post which made me think of a smilie face. 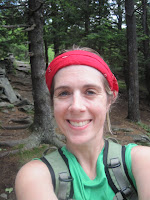 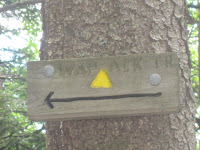 Finally we reached the summit!  Really it WAS an easy hike up but we were hot and tired.  There were lots of people up there and on the knoll to the east.  We stayed for a bit and took a few pictures.  I should have taken more but I was itchin' to find the end of the trail. 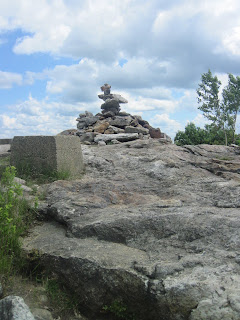 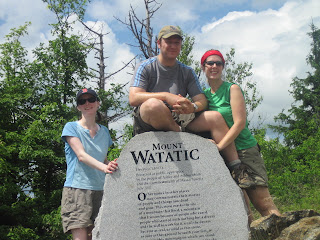 We found the trail that pointed towards the Wapack trail and NH and quickly went down the path towards Nutting Hill.  The trail probably wasn't as long as it seemed but its like when you know you want to go somewhere but you don't know exactly where it is, sometimes the journey seems a lot longer.  We crossed Nutting Hill and met up with a small group of hikers.  Then we went off down the old jeep road.  The trail signs were a bit confusing and we were pretty close to giving up when we found a small side trail with blue blazes.  I'm glad I brought my trail guide that day.  I almost left it in the car since I had a topo with me.  We followed the Blue Blazes and found the original Terminus Monument. After quickly snapping a photo because the bugs were thick, we started back south towards the fork in the trail.  We found a tiny garter snake getting some water. 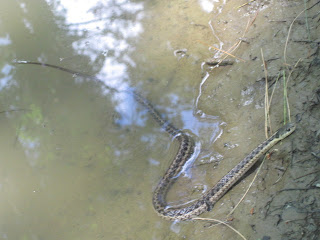 When we reached the fork wit the crazy trail signs we took the path back towards Rt. 119 (State Line Trail).  It was significanly quieter than the main trail and a gentler grade for my knees.  The day was very clear and when we walked past the small pool near the parking lot the reflection of the sky and trees was lovely. 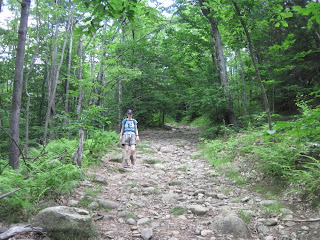 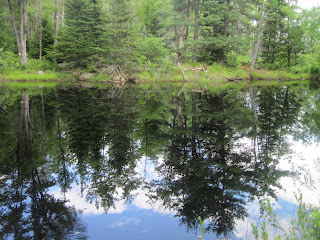 So I started hiking this trail March 2008.  Obviously, this past year, I was determined to complete the trail.  I enjoyed the Northern Half more than the Southern Half.  I found that the road hiking in the south was uncomfortable and hard on the legs.  And of course I would prefer to be in the woods than in the neighborhoods.
I am extremely grateful to have found this trail though.  I feel as if I have developed a better understanding about the state I live in.  Usually I hike in the White Mountains for a day hike or overnight.  This trail gave me an appreciation for neighborhood trails and local conservation groups.  I hope that it is a trail that can remain and not be overtaken by the nearby developments.  After all, we need a little bit of space to get back to reality.
What's next?  Hmmm well the Wapack doesn't look too challenging (or is that just challenging enough?).  There's a few 4000' mountains calling my name too.  Guess I'll have to make sure to use my summer off wisely!