So I started this post right after the hike but a week has gone by and it's now time to finish. On June 11 Ben and I decided to hike the next section of the Midstate. Little did we know that the showers predicted for that day were to be more like heavy rains. 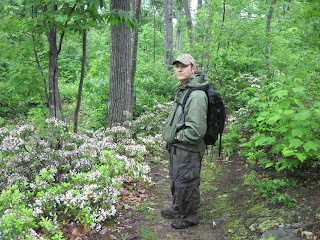 Through the beginning of the hike, I kept checking with him to see if he wanted to bail. I wouldn't say I wanted to head for home but if he did I was right on board. Alas, neither of us wanted to wimp out so we trudged on. I complain but it wasn't too bad. The rain kept the bugs at bay for most of the trip.

About 2 miles in we came to Redemption Rock. We climbed up it and looked for the engraving. The engraving was quite worn down and barely readable but it was there.


We crossed Highway 140 and entered Leominster State Forest. The rain became increasingly worse and unfortunately, we were starting to get cold. We pushed on and the rain started to let up. Fortunately, we were up on the top of Crow Hills and there was a breeze. This helped us to dry off some of our rain gear. The hills in this park had stone stairways that were quite slippery. We had to use extra caution when climbing them. 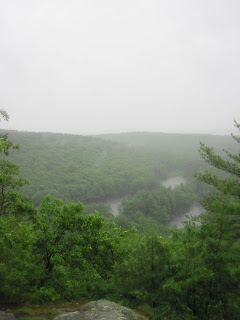 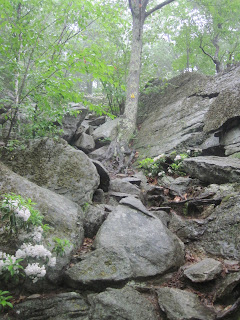 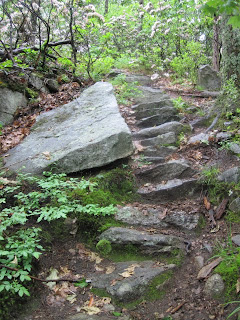 We traveled to the end of the park and behind new housing developments. There was a brief moment of confusion as we came to the junction of Stone Hill Road and Narrows Road. A new house had been built and the trail marker was up the driveway. We felt as if we were trespassing briefly but then we crossed back into the woods and followed the trail to the Wachusett Village Inn. 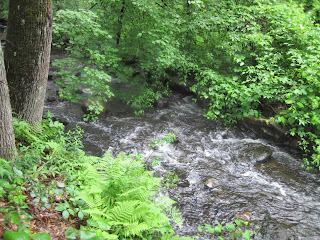 We crossed over Rt. 2 on the Waterman Memorial Bridge. The rain had decidedly stopped (for the moment) and we stood briefly over the traffic to let the breeze dry out our raincoats. Both of our coats were wet inside and out. 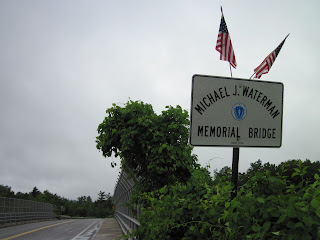 About a mile after Rt. 2, we crossed Highway 2A. A little bit later we heard people hiking behind us. For the first time that day, there was another couple on the trail. As we worked our way to the power lines we lost the trail. They blazed through and found it again. We leapfrogged each other on the trail. They pulled ahead as we entered the pasture lands. 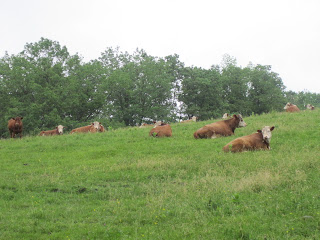 Throughout this hike we've followed and crossed over many stone walls. This was the first time we actually walked on the walls. The grasses were quite high in the pasture and the trail markers were directly next to the walls so it seemed to be the most practical thing to do. 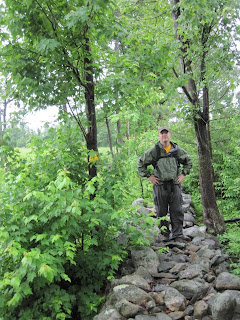 We hiked along the walls in the woods after we left the pastures. The trails in this section were a tad confusing. The other couple lost the trail and we could see why. For some reason the trail started to switchback downhill and then over to the gravel Syd Smith Road. It seemed like we could have gone straight to the road and downhill.

We walked on through the woods and started seeing signs along the border of private property. At this point, I was pretty done with hiking for the day and starting to feel miserable. Fortunately, there was a boardwalk and we could hear construction vehicles. Ben thought we were near the end. Turns out he was right. We found Graffiti Bridge and our car.

I must admit, I feel that the bridge is a bit trashy. I understand that it is a tradition in Westminster for students to put their mark on it. However, the amount of rubbish that was on the ground under the bridge was awful. If only people would clean up after themselves. Oh and create better artwork. At this point, we are 13.5 miles from the north end of the Midstate Trail. Our next hike is on the calendar. It seems as though our hiking buddies have found other summer fun, but that's okay. We miss them on the trail but we're determined to finish hiking this in 2011! And then back up north for the real mountains. :-)